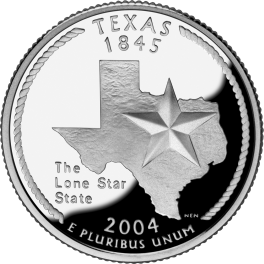 The obverse of the 2004 Texas State Quarter shows the standard Washington Quarter design with a few alterations. The Washington Quarter, that ran from 1932-1998, had the date on the obverse, as well as the word “Liberty.” This design was changed slightly with the introduction of the State Quarters, and later the Territory Quarters and National Park Quarters. The new design still shows Washington looking left, however the obverse text now reads “United States of America – Liberty – In God We Trust – Quarter Dollar.” The reverse of this coin depicts the “Lone Star” state’s outline with a star overlapped. This design was created quite literally, as the designer added a star to the map. Encircling the state outline is a lasso which was used by Cowboys in the early days of the state. The state was added to the union in 1845. The idea for the design actually predates Texas’ joining of the Union, though. Originally the Republic of Texas, the flag featured a lone-star in 1839. While on the topic of the flags of Texas, it is interesting to note, according to David Bowers book on State Quarters that the Six Flags Theme Park was born in Texas. Texas has “been under the flags of Spain, France, Mexico, Republic of Texas, United States of America, Confederate States of America, and United States of America again.” Six flags in total to represent the theme park’s name. A majority of the design concepts for this coin featured the state outline, overlapped with one or two additional elements. Various designs showed the Alamo, cattle, and cowboys, instead of the star. Right before his election in 2000, Governor George W. Bush appointed a team of 15 people to help design the quarter. Rather than designing the coin with their limited knowledge, the group asked for the help of the Texas Numismatic Association. 2,500 ideas were received, which was later narrowed down to 17 solid finalist. Governor Rick Perry selected the winner, Daniel Miller. Miller grew up in Texas and lived right outside of Arlington. This was one of the easiest and smoothest moving coin competitions, as there was no controversy, and the winner was publicly announced. This was the 28th coin released in the Statehood Quarters program. The reverse text of the coin reads “Texas 1845 – The Lone Star State – 2004 – E Pluribus Unum.” All of the Statehood Quarters were clad, meaning that they were seventy-five to eighty percent copper, and the rest was composed of nickel. The core of the coins were solid copper. These coins, however, were produced in silver for special Silver Proof Sets. The coins minted in included Michigan, Florida, Texas, Iowa, and Wisconsin
Errors on the 2004 Texas State Quarter There are currently no known errors of this coin. If you ever run across anything that looks unusual with the Texas State Quarter, please contact one of our experts to have the error verified, or send the coin to a professional grading company for their opinion. However, the average circulation State Quarter is only worth the face value of $0.25. These coins can be spent, saved, or taken to the bank.
Varieties on the 2004 Texas State Quarter This coin, designed by John Flanagan and Norman Nemeth was produced in a silver variety as part of proof sets. There were a total of 1,769,786 silver coins produced for this series. They are composed of 90% silver and 10% copper. The average price of the single silver coin ranges from $5 to $10, depending on the grade. The easy indicator to determine if your coin is silver is by the mint mark. The silver quarters will have an “S” mintmark, rather than a “P” or “D.” In addition to the silver quarters, late-night TV. began selling gold plated State Quarters in an attempt to con viewers into thinking that the coin would be worth a lot more. Unfortunately, the amount of gold that it takes to plate a quarter is very insignificant, and these gold plated quarters have no value in the collector community.