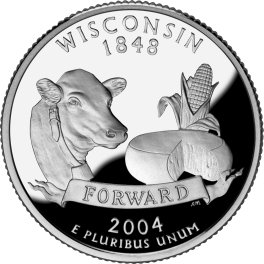 The obverse of the 2004 Wisconsin State Quarter shows the standard Washington Quarter design with a few alterations. The Washington Quarter, that ran from 1932-1998, had the date on the obverse, as well as the word “Liberty.” This design was changed slightly with the introduction of the State Quarters, and later the Territory Quarters and National Park Quarters. The new design still shows Washington looking left, however the obverse text now reads “United States of America – Liberty – In God We Trust – Quarter Dollar.” The reverse of this coin depicts a celebration of the dairy products that come out of Wisconsin. Wisconsin has always been well-known for its agriculture and farming. This coin displays a cow on the left side of the coin. On the right side of the coin there is a stalk of corn and a wheel of cheese below. The stalk of corn is addressed below (value-wise) in the errors section of the coin because of a leaf that will appear on some coins. However, we will discuss the extra-leaf varieties here for design purposes. Ben Weinstein was the first person to discover the new variety of the coin when a longtime customer at his shop bought in two coins to look for die breaks. This man, Bob Ford, periodically bought in items to look through with Weinstein so that a professional eye would be on the coins as well. Both Weinstein and the shop owner, Rob Weiss, noticed that the coins had a strange variety. In no time, they had purchased the coins and contacted some numismatic magazines to confirm their new discovery. Estimates show that close to 2,000 of the low leaf exist, and close to 3,000 of the high leaf. The main area that most of these error coins were distributed were in central Arizona. In a press release from the United States Mint, it is assumed that someone added extra leaf as a sort of “retirement celebration.” The Director stated that there is no way that this extra leaf would have occurred naturally. The line does not follow any other patterns on the coin. These lines also do not appear to be the same length on each variety, so they were intentional marks made on both coins. In regards to the development of the coin design, Governor Scott McCallum appointed 23 people to the Wisconsin Commemorative Quarter board. There were 9,608 ideas submitted for the coin. From these entries, they were narrowed down to just six finalist. The process for deciding on the coin was admittedly flawed, but the Governor was eventually able to accept the design of a cow head surrounded by dairy products. The engraver of this coin retired just weeks after completing the design. This was the 30th coin released in the Statehood Quarters program. The reverse text of the coin reads “Wisconsin 1848 – Forward – 2004 – E Pluribus Unum.” All of the Statehood Quarters were clad, meaning that they were seventy-five to eighty percent copper, and the rest was composed of nickel. The core of the coins were solid copper. These coins, however, were produced in silver for special Silver Proof Sets. The coins minted in included Michigan, Florida, Texas, Iowa, and Wisconsin
Errors on the 2004 Wisconsin State Quarter There is one error for the state of Wisconsin, but it can be found in two variations. The error is associated with the leaves on the corn stalk. On the left side of the stalk, there is normally one leaf that stands straight up, and one leaf that is falling down. However, in these two variations, there is an extra high leaf and an extra low leaf. For the extra high leaf, you will see three total leaves on the stalk. The extra leaf will touch the bottom of the drooping stalk. On the extra low leaf, there are three total leaves, and the extra leaf will touch the top of the cheese. These two variations only occur on the Denver mint marked coins. There were 226,800,000 coins minted at the Denver mint this year, and these errors are included in the mintage amount. Depending on the quality of the strike and the variation, your coin can range from $50 to $100. Some coins that are in pristine shape can even go for much more. To find out how much your variation is worth, please send us an image. However, the average circulation State Quarter is only worth the face value of $0.25. These coins can be spent, saved, or taken to the bank.
Varieties on the 2004 Wisconsin State Quarter This coin, designed by John Flanagan and Alfred Maletsky was produced in a silver variety as part of proof sets. There were a total of 1,769,786 silver coins produced for this series. They are composed of 90% silver and 10% copper. The average price of the single silver coin ranges from $5 to $10, depending on the grade. The easy indicator to determine if your coin is silver is by the mint mark. The silver quarters will have an “S” mintmark, rather than a “P” or “D.” In addition to the silver quarters, late-night TV. began selling gold plated State Quarters in an attempt to con viewers into thinking that the coin would be worth a lot more. Unfortunately, the amount of gold that it takes to plate a quarter is very insignificant, and these gold plated quarters have no value in the collector community.