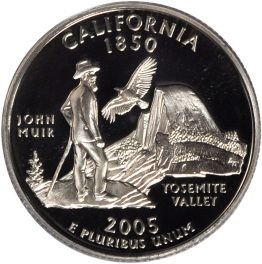 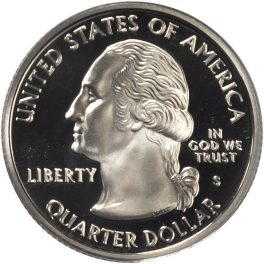 The obverse of the 2005 California State Quarter shows the standard Washington Quarter design with a few alterations. The Washington Quarter, that ran from 1932-1998, had the date on the obverse, as well as the word “Liberty.” This design was changed slightly with the introduction of the State Quarters, and later the Territory Quarters and National Park Quarters. The new design still shows Washington looking left, however the obverse text now reads “United States of America – Liberty – In God We Trust – Quarter Dollar.” The reverse of this coin depicts the famous Half Dome in Yosemite National Park. In the foreground is a well known conservationist, John Muir observing the scenery. In the center of the coin, to Muir’s right is a California Condor which nearly because extinct. Muir became well known for his efforts to protect Yosemite Valley from destruction during and after the Gold Rush. California became a state shortly before the gold rush began. Some may remember that the Mint had previously made the announcement that they would no longer take drawn concepts for the coins, but rather they would only take written concepts. Well. this all was changed for the California state quarter. Governor Gray Davis began to receive submissions at his Sacramento office. A committee was selected by the Governor to look through all entries and judged the best. These entries were then put onto the internet for citizens to vote on. The governor selected his favorite five designs, despite the thoughts of the people and the results of the vote. Ultimately, Governor Davis was thrown out of office for mismanagement, so the decision went back to the newly elected Governor Schwarzenegger in 2003. The final five entries were bought back, and they included “the Golden Gate Bridge,” “a Gold Miner and the Gold Rush,” “John Muir and Yosemite,” “Waves and Sun,” and “a Sequoia Tree.” Once again, they opened voting to the citizens, but once again the results were ignored and the Governor chose his favorite. Much to everyone’s surprise, the Governor did not choose the popular Gold Rush theme, but rather Yosemite Park with John Muir. The design for the coin ended up being very well done. Schwarzenegger says that he believed that Garrett Burke’s design was the most beautiful one he saw. Not many people were happy about the final choice for the coin, but the Governor paid them no attention at all. This was the 31st coin released in the Statehood Quarters program. The reverse text of the coin reads “California 1850 – John Muir – Yosemite Valley – 2005 – E Pluribus Unum.” All of the Statehood Quarters were clad, meaning that they were seventy-five to eighty percent copper, and the rest was composed of nickel. The core of the coins were solid copper. These coins, however, were produced in silver for special Silver Proof Sets. The coins minted in included California, Minnesota, Oregon, Kansas, and West Virginia
Errors on the 2005 California State Quarter There are currently no known errors of this coin. If you ever run across anything that looks unusual with the California State Quarter, please contact one of our experts to have the error verified, or send the coin to a professional grading company for their opinion. However, the average circulation State Quarter is only worth the face value of $0.25. These coins can be spent, saved, or taken to the bank.
Varieties on the 2005 California State Quarter This coin, designed by John Flanagan and Don Everhart was produced in a silver variety as part of proof sets. There were a total of 1,678,649 silver coins produced for this series. They are composed of 90% silver and 10% copper. The average price of the single silver coin ranges from $5 to $10, depending on the grade. The easy indicator to determine if your coin is silver is by the mint mark. The silver quarters will have an “S” mintmark, rather than a “P” or “D.” In addition to the silver quarters, late-night TV. began selling gold plated State Quarters in an attempt to con viewers into thinking that the coin would be worth a lot more. Unfortunately, the amount of gold that it takes to plate a quarter is very insignificant, and these gold plated quarters have no value in the collector community.