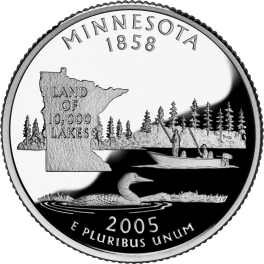 The obverse of the 2005 Minnesota State Quarter shows the standard Washington Quarter design with a few alterations. The Washington Quarter, that ran from 1932-1998, had the date on the obverse, as well as the word “Liberty.” This design was changed slightly with the introduction of the State Quarters, and later the Territory Quarters and National Park Quarters. The new design still shows Washington looking left, however the obverse text now reads “United States of America – Liberty – In God We Trust – Quarter Dollar.” The reverse of this coin depicts an outline of the state to the left side of the coin. Towards the bottom of the coin is a loon, and two people fishing in a lake appear to the right. The entire background of the coin shows a lake with trees in the background. Minnesota is known as the “Land of 10,000 Lakes,” so it seemed fitting for the coin to show just that. Minnesota became a state in 1858. The Minnesota Quarter Dollar Commission was set up in May 2003. Bill Himmelwright was a member of the team, as well as a local numismatist. The group was asked to take comments from the public on what the design should entail, and to narrow those choices down to just five options. Schools were allowed to help, and were given instructions from the Mint on how to present material to the students. The Mint requested only ideas, and no images. The Commission eventually made give choices, and sent the ideas to the Mint. The Mint immediately shot down one idea that was going to depict a snowflake. The four that were left were a plow, snowflake, and a loon; two separate designs that showed the lakes and loons in different forms; and the Mississippi River headwaters. On May 14, Governor Pawlenty recommended that the design to adopt would be the current design. The decision was publically announced on the night before the beginning of fishing and hunting season. This was the 32nd coin released in the Statehood Quarters program. The reverse text of the coin reads “Minnesota 1858 – Land of 10,000 Lakes – 2005 – E Pluribus Unum.” All of the Statehood Quarters were clad, meaning that they were seventy-five to eighty percent copper, and the rest was composed of nickel. The core of the coins were solid copper. These coins, however, were produced in silver for special Silver Proof Sets. The coins minted in included California, Minnesota, Oregon, Kansas, and West Virginia
Errors on the 2005 Minnesota State Quarter There is one error for the state of Minnesota that takes shape in several different forms. The error is associated with the trees in the background, above the lake. There were some problems with the dies that were used, causing the trees to be duplicated in several different parts. You may have one of these errors, or you may have several. On the fifth tree from the left of the coin, there is sometimes a small tree barely visible to the side of it. Also, that tree sometimes appears below the tree, in which case it is difficult to view. Another error can sometimes be seen as a trunk running through the entire tree that is sixth from the left. In some cases, a dot or circle may appear above the tree fifth from the left. There can be any number of other issues with the coins, so if you think that you may have an error coin, please have an expert or professional grading service verify the error before you sell the coin. Depending on the coin and the grade, the error could fetch anywhere from $5 to $100. However, the average circulation State Quarter is only worth the face value of $0.25. These coins can be spent, saved, or taken to the bank.
Varieties on the 2005 Minnesota State Quarter This coin, designed by John Flanagan and Charles Vickers was produced in a silver variety as part of proof sets. There were a total of 1,678,649 silver coins produced for this series. They are composed of 90% silver and 10% copper. The average price of the single silver coin ranges from $5 to $10, depending on the grade. The easy indicator to determine if your coin is silver is by the mint mark. The silver quarters will have an “S” mintmark, rather than a “P” or “D.” In addition to the silver quarters, late-night TV. began selling gold plated State Quarters in an attempt to con viewers into thinking that the coin would be worth a lot more. Unfortunately, the amount of gold that it takes to plate a quarter is very insignificant, and these gold plated quarters have no value in the collector community.