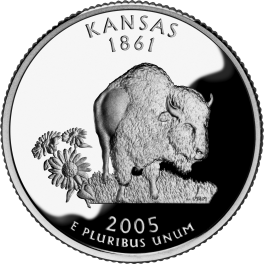 The obverse of the 2005 Kansas State Quarter shows the standard Washington Quarter design with a few alterations. The Washington Quarter, that ran from 1932-1998, had the date on the obverse, as well as the word “Liberty.” This design was changed slightly with the introduction of the State Quarters, and later the Territory Quarters and National Park Quarters. The new design still shows Washington looking left, however the obverse text now reads “United States of America – Liberty – In God We Trust – Quarter Dollar.” The reverse of this coin depicts a large American Bison in the center of the coin. Towards the bison’s rear leg on the left of the coin is a few flowers that imply that the bison is standing in a field. The flower shown here is actually a sunflower. The sunflower and the bison are both state symbols for Kansas. Kansas became the 34th state to join the union. As all of the other states have done, Governor Kathleen Sebelius invited citizens and students to participate in the design competition. There were 1,6000 entries received by the 16 member committee. Most concepts included a bison, Indian, sunflowers, or wheat. The final design, as you can see, combines two of those items into a well balanced collage. One design even said “There is no place like home,” in reference to Dorothy in “The Wizard of Oz.” Local High School students voted to choose the final design. The state sent off their design recommendation to the United States Mint. After the first version was sent back, the state stated that some changes needed to be made. The horns of the bison were incorrectly shaped, the head was too low, and the ground looked fake. After the Mint received and made these changes, the design looked much better. The coin’s design was favored among many collectors, especially those who were fans of the Buffalo Nickels produced in the early 1900s. This was the 34th coin released in the Statehood Quarters program. The reverse text of the coin reads “Kansas 1861 – 2005 – E Pluribus Unum.” All of the Statehood Quarters were clad, meaning that they were seventy-five to eighty percent copper, and the rest was composed of nickel. The core of the coins were solid copper. These coins, however, were produced in silver for special Silver Proof Sets. The coins minted in included California, Minnesota, Oregon, Kansas, and West Virginia
Errors on the 2005 Kansas State Quarter There are two common errors on Kansas’ coin. The first coin is due to a damaged die that was used for production of the obverse of the coin. The die says “In God We Rust” instead of “In God We Trust.” This coin is fairly common and can be found with enough searching through rolls of bank wrapped quarters. The second error is found on the reverse with the bison’s back. This error is popularly known as the Humpback Bison. Look for a small tag on top of the bison’s hump. The error will look like a poof of hair on the bison is sticking up, whereas the hump should normally be nicely rounded. Each of these coins are worth up to $100. However, the average circulation State Quarter is only worth the face value of $0.25. These coins can be spent, saved, or taken to the bank.
Varieties on the 2005 Kansas State Quarter This coin, designed by John Flanagan and Norman Nemeth was produced in a silver variety as part of proof sets. There were a total of 1,678,649 silver coins produced for this series. They are composed of 90% silver and 10% copper. The average price of the single silver coin ranges from $5 to $10, depending on the grade. The easy indicator to determine if your coin is silver is by the mint mark. The silver quarters will have an “S” mintmark, rather than a “P” or “D.” In addition to the silver quarters, late-night TV. began selling gold plated State Quarters in an attempt to con viewers into thinking that the coin would be worth a lot more. Unfortunately, the amount of gold that it takes to plate a quarter is very insignificant, and these gold plated quarters have no value in the collector community.