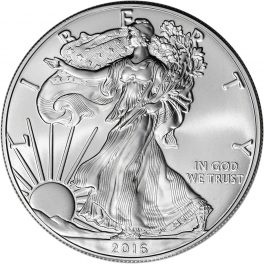 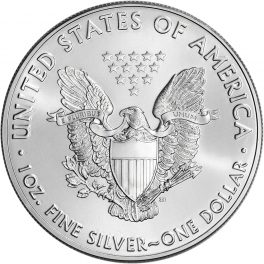 An American Silver Eagle, also called an ASE by some collectors, is a bullion coin minted by the U.S. mint. Each coin has a declared value of just one dollar. However, these are bullion coins, meaning they contain precious metals. All 2016 American Silver Eagle coins are made up of one ounce of pure silver. Because of that silver content, each regular issue 2016 $1 silver coin usually trades for around $2 above or below the current price of an ounce of silver depending on if you are buying or selling. For your information, we pay the current spot price for non-proof American Silver Eagles. As an example, if the silver spot price is $20, then we will pay $20 per coin.

Each one dollar coin has the following text: 2016 – LIBERTY – In God We Trust – United States Of America – E Pluribus Unum – 1 OZ. Fine Silver One Dollar | The design is fairly simple. The front (or obverse) of the coin shows Lady Liberty with the sun behind her. The back, which is also called the reverse, shows an eagle, shield, and 13 stars.

We don’t know the mintage figures yet, but if the past two years are any indication, then around one million proof silver eagles were minted in 2016. Collectors refer to proofs as 2016-W ASEs. A proof strike has a W mint mark under the left side of the eagle. A regular strike does not have the W mint mark. Proof coins are certainly worth more than standard issue American Silver Eagles. Contact us for an offer on your coin.