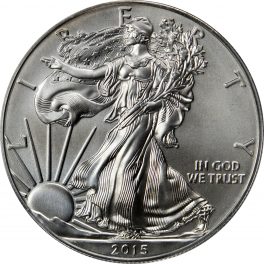 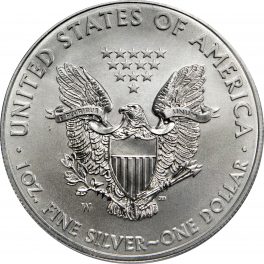 American Silver Eagle $1 coins were first minted in 1986.  The United States mint is still producing millions of current date silver eagles each year.  These coins, which are sometimes referred to as ASEs by collectors, contain an ounce of silver.  Due to their large mintage numbers, there is no single regular strike coin that is rare.  However, since each coin does have silver in it, the least the coin is worth is whatever an ounce of silver is worth.

We pay at least the melt value for a regular strike American Silver Eagle, no matter the year.  So if an ounce of silver is worth $18, then we will pay $18 for even the most common ASE $1 coins.  Most dealers pay a percentage back of the price of silver.  We sell thousands of silver coins annually, so we can generally pay more than our competitors.  Before you accept an offer on your coin, you need to first make sure that you don’t have a proof coin.  A proof coin will have a P, S, or W mint mark below the left side of the eagle’s wing.  Proof coins sell for more than just the silver value.  And there are a couple of proof coins that actually sell for several hundred dollars or more.  If your American Silver Eagle does not have a P, S, or W mint mark then you have a regular strike coin; and those are basically just worth the silver value.

Our ASE value guide has pictures, mintage numbers, and general info about American Silver Eagles from every year.  If you are considering selling your coin or entire collection, then we would certainly like a chance to make an offer.