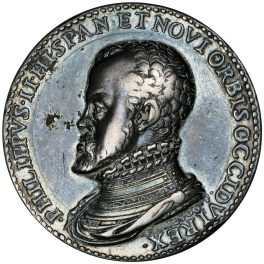 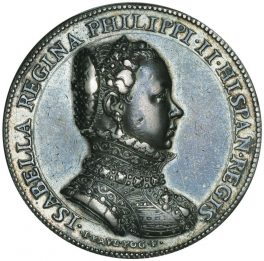 Value of 1559 Marriage of Philip and Isabella Medal

The front of this medal has the same image as the Peace of Cambria medals; a bust of Philip, in armor, facing left. The Latin inscription translates to “Philip, King of Spain and of the New Western World”. The reverse has an image of Philip’s third wife, Isabella of Valois, whom he married after the Peace of Cambria, in 1559. Her title, which is inscribed in Latin, translates to, “Isabella of Valois, wife of Philip II, King of Spain”. These exceptionally cast medals have sharp images of both king and queen in high relief. Both sides are signed by the artist, “J. Pavl. Pog. F”. These are commemorative medals, celebrating both the new marriage and the Peace of Cambria.