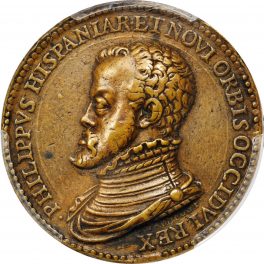 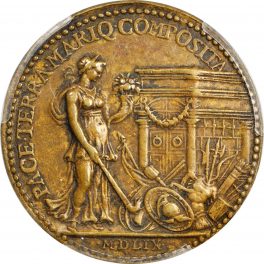 History, Information, and Value of 1559 Peace of Cambria Medal

Value of 1559 Peace of Cambria Medal

This metal is particularly rare in silver, while the bronze casting is more common. The front translates to “Philip, King of Spain and of the New Western World” while the back translates to “Peace established by land and sea, 1559”. The front has a high-relief armored bust of Philip facing left, under which is the signature of the artist, Giovanni Paolo. The reverse has an image of Peace before the temple of Janus, holding a cornucopia in her left hand and a torch in her right hand with which she is burning artifacts of war. Around the scene is Latin which translates to “Peace established by Land and sea, 1559”. The piece is dated on the back and is commonly known as the Peace of Cambria medal.