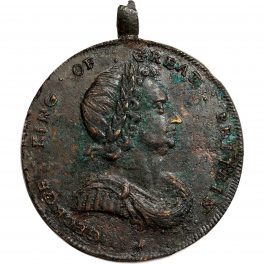 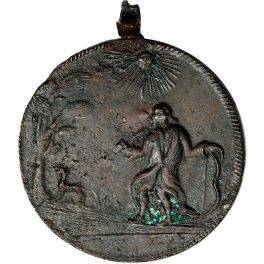 History, Information, and Value of 1721 George I Indian Trade Medal

This medal is one of the early British-Indian peace medals and very similar to the previous versions. On the obverse is depicted George I, in armor, facing to the right while wearing a laurel crown with twelve leaves. Encircling his image is his title, “George King of Great Britain”. Reverse depicts a small native on the right of coin, throwing a spear at a small deer, which is standing at the left of the coin. Next to the deer, on the same hill, is a tall tree and above the tree to the right is the sun shining. While not dated, records indicate this medal was struck sometime between 1714 and 1727. Additionally, the medal is not signed so the artist is unknown.

The obverse and reverse text read as follows: George King of Great Britian | and | .