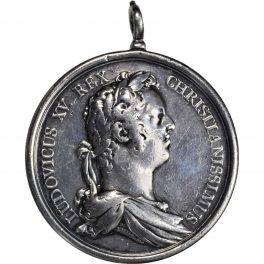 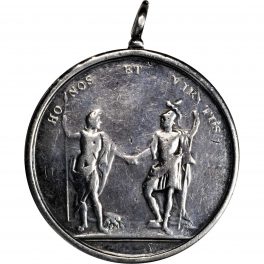 This Indian Peace Medal is the first recorded to be used officially by the Europeans in their trade with the natives. There are only eleven known medals of this variety even though hundreds were made. The size of medal indicates the importance the French placed on trade with the natives, as this medal is substancially larger than similiar English peace medals of the era. Obverse, this medal displays a bust of Louis XV, draped, facing to the left and wearing a laurel crown. Encircling his head is his title. Reverse, displays two warriors as Honor and Valor, also representing France and the French Indian ally nations. Both figures are extending their hands in a handshake, while the other hand grasps a spear. Around the two figures translates as, “Honor and Valor”. This medal is signed by Du Vivier but is not dated.