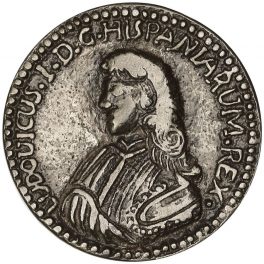 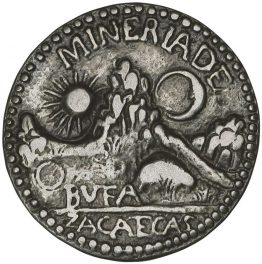 History, Information, and Value of 1724 Proclamation in Zacatecas Medal

Value of 1724 Proclamation in Zacatecas Medal

This extremely rare medal depicts the young King Louis I, in 1724 during his brief tenure as king of Spain, while proclaiming Spanish rule in the New World. The young king died from smallpox after ruling for only seven months, but during his tenure as king, he oversaw the expansion of Spanish colonies in the New World. Obverse of the medal features a bust of the youthful king, his figure facing to the left wearing armor. Around his image is his Latin title, which translates, “Louis I King of Spain”. The outside edge of the medal is decorated with small dots. Reverse displays mountains, with the sun on the left and the crescent moon on the right. Below the mountains are the Mines of Zacatecas, which the legend at the top explains. At the base of the mountain, in the foreground on the left, the moutain’s name translated, “Bufa”.