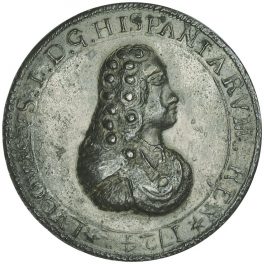 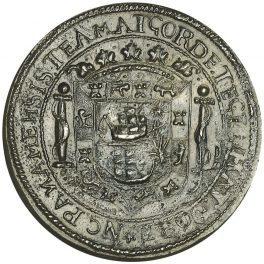 History, Information, and Value of 1724 Proclamation in Panama Medal

Value of 1724 Proclamation in Panama Medal

This extremely rare medal depicts the young King Louis I, in 1724 during his brief tenure as king of Spain. The young king died from smallpox after ruling for only seven months. The bust faces to the right and is draped within a circle, outside of which is Louis’ title. Reverse depicts the Arms of Panama City. A shield is divided into parts, within the center part are two ships, sailing in the opposite directions, a star in each frame. Around the ships is a border of lions and castles, outside of which are two scrolls, and crown on the top of the crest. Written around the arms, “Our city of Panama loves thee with its heart, and proclaims thee with its lips.” The first “n” of Panama is backwards. The artist does not mark this medal.