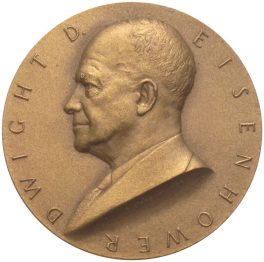 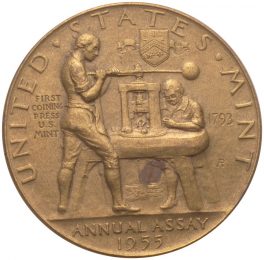 The Annual Assay medal for 1955 displays an image of current President, Dwight Eisenhower on the obverse. Eisenhower faces to the left and his name is on the legend around his head. The reverse is a copy of the 1928 medal, which depicts two men working on a coining press. One man stands and pushes a lever while the other sits behind the machine. The legend reads, ÜFirst coining press U.S. Mint 1793. United States Mint, Annual Assay 1955.”