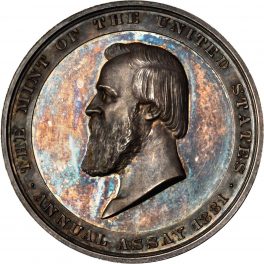 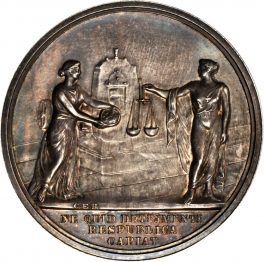 The Assay Commission Medals began when the Report on the Establishment of a Mint was present to Congress with the suggestion that coinage or medals should be created to insure the purity of the metal being used. The idea of an Assay Commission began in Great Britain when King Edward I insisted that there should be some way to test the metal. King Edward I made this decision in 1279. The Commission has met every year since 1797, except for in 1817 when there was a shortage of precious metal.

The actual medals that were produced by the Assay Commission range in depiction. Some showed only the President with a simple text on the reverse. Others would show ornate illustrations of coinage being produced. And finally, some would show a special event from the specific year. In 1879, the illustration represented the death of H.R. Linderman, the Director of the Mint. From time to time, there would be several medals produced out of a variety of metals. However, in 1874 New York Assay Office Superintendent Thomas asked for several medals to present to his friends. This caused a public uproar, and ever since then there has been only one medal produced per year.

If you think that you may have an Assay Commission Medal, please contact us to have it confirmed. We are always interested in making offers and buying rare Medals.