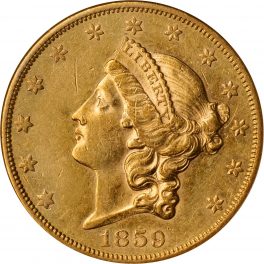 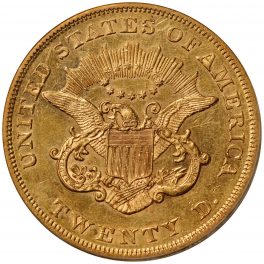 The 1859 $20 double eagle is the lowest mintage Type 1 Liberty Head double eagle from the Philadelphia Mint. A new obverse hub was employed this year that featured designer James B. Longacres initials further to the left on Libertys truncation, in addition to modifications made to Libertys hair curls and portrait. This hub was used through the end of the Type I design type in 1866. Examples of this issue are generally well-struck, but are often heavily abraded. Most examples are heavily worn and are confined to VF and EF grades. Choice AU survivors are legitimately rare and come to auction only two to three times per year, on average. There are just an estimated 6 to 8 coins remaining in Mint State, the finest of which grade MS-62. Of the 80 Proofs reportedly struck, only eight or nine coins can be accounted for today.