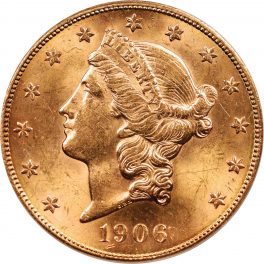 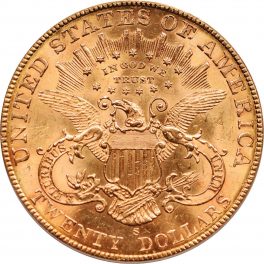 A lustrous issue that also tends to come moderately to heavily abraded, the 1906-S displays an overall sharp strike. A few examples are somewhat softly defined in and around the central reverse, although this feature is minor. Easily obtainable in grades through MS-63, the 1906-S is scarce in MS-64, yet still relatively easy to acquire at that level compared to some other Liberty Head double eagles. This issue is rare in Gem Mint State, by far the finest known survivor is the phenomenal Clapp-Eliasberg specimen that John H. Clapp acquired directly from the San Francisco Mint in 1906. That coin has since been certified MS-67 by PCGS.